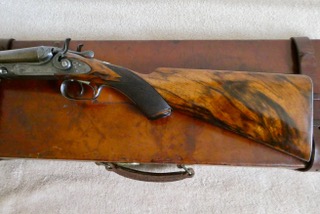 In 1893, one of the greatest extravaganzas of all time took place in Chicago, IL. Billed as “The Chicago World’s Fair” and also known as “The Colombian Exposition,” which commemorated the 400th. year anniversary of the discovery of the New World by Columbus in 1892. This was the granddaddy of all fairs at the time and we’re likely to never see such a spectacle again.

The fair was held from May thru October 1893 and much has been written about the event and all that took place during its run so I will not go into a-lot of detail about what happened. Instead, let me direct you to a book called “The Devil in the White City” by Eric Larson written to document all the drama and death that transpired during that time. Another really good and informative article by Steve Cambria is a great read and appeared in the Autumn 2017 issue of the DGJ. His article also documents another Parker (Serial # 70578) that was displayed at the Exposition. Other interesting facts were that the city of Chicago spent an estimated and staggering 31million dollars on its construction and 2 years of building and preparation for hosting the Fair. There were representatives and exhibitors in attendance from 46 nations around the world including hundreds of manufacturers from our own country displaying everything imaginable from chewing gum to guns and literally everything in between. It was in fact, quite electrifying with the Westinghouse Corporation presenting the very first application of Tesla’s A/C current and with the flip of a switch the entire Exposition was illuminated with two hundred thousand electric light bulbs for all in attendance to see. The world would marvel at one of the newest inventions that would change our lives forever. Can you imagine the wonder of seeing all those electric lights for the very first time? It was so bright that with the walls of all the buildings finished in alabaster it became known as “The White City”. Thousands attended the opening day ceremonies and a large portion (estimated to be one-half) of the entire United States population attended during its six-month period.

This brief account of the Exposition was just a segue to what “Parker People” appreciate, a short story of one of these guns we love and want to share facts of its history with others.

One of the exhibitors at the fair was our very own Parker Bros. and they were located in the “Manufactures and Liberal Arts Building” in space 866.  As many of you are aware, Parker Bros. shipped one hundred of their finest guns to the Colombian Exposition for their display, ranging from Grade 0 all the way to Grade 6. One of these guns is described below:

Quoting from the factory letter, “Parker shotgun, serial # 72578 was sent to the World’s Fair Colombian Exposition in Chicago, Il. on March 27, 1893. According to Parker Bros. Order Book No. 34, it was a Quality D, Top Action Hammer Gun, 12-gauge. It featured Damascus steel barrels with a length of 28 inches. The stock configuration was a pistol grip.

Doing additional research on this gun, I discovered that according to the “Parker Story, Vol. 1, Chapter VIII, pg. 223,” and I quote: “Guns of Grade 3 and above were not usually made for inventory or speculation of sales. These high-grade guns were made to customer orders, except for a few guns made for exposition or as promotional guns.”

It begs the question, could this gun and some of the others, have been made exclusively for the Exposition?? Chapter XV of “The Parker Story” entitled “Show Guns” gives additional insight into this topic. One can only wonder.

Further research revealed that the original owner ( Mr. J.R. Hegeman) was a Vice President of the Metropolitan Insurance Company of New York. He was an avid collector of Colt Firearms between the years of 1885 and 1925 but obviously had an appreciation for fine shotguns!!

Due to divine providence, or shall we say blind luck, I recently became the caretaker of this exceptional Parker, courtesy of a good friend, fellow competitor, and Parker enthusiast, Mr. Dave (The Parker Gentleman) Fjelline. Many of you are familiar with Dave from his distinguished shooting with the Parker Group in the SxS competitions.

I can’t help but wonder, like many of you that have treasured Parkers, about all that has transpired with this gun in all these many years since that World’s Fair Exhibition. Also, how many thousands of visitors to the Fair ventured into that grand Parker display to get a look and handle all those beautiful shotguns. I’m sure many a youngster looked at all those exceptional guns and marveled at them with a gleam in their eye and thought to themselves, “maybe someday I’ll have one of my own.”

The fact that this gun was handled and cared for at the Parker display by Mr. S. A. Tucker (responsible for the exhibit) and possibly none other than Mr. A. W. du Bray himself, makes it special for me.

A side note to this story. There are a lot of what I call strange coincidences of numbers associated with this gun. As stated earlier, Parker Bros. sent 100 guns to the Exposition. I now have 1 of the 100. I was born in Illinois and lived 100 miles from Chicago and the Exposition. The road from my hometown to the Exposition was, you may have guessed, Route 1! There is only 1 remaining building from that grand Exposition which is currently the Museum Of Science & Industry. Mr. Hegeman initially purchased this gun 1  day before my wife’s birthday in December. My father was born 1 year before this gun was manufactured. Among his possessions at the time of death was a Colombian half dollar from the Exposition that I kept, never realizing its significance until now. Finally, Mr. Hegeman, who first purchased this Parker had his office at……… No.1, Madison Ave.

Was this meant to be? Maybe so. I am honored to be its new caretaker!

Many thanks to Chuck Bishop for providing the factory letter and other documentation for this article, Mary Bowes for her help and patience, the authors of the Parker Story for their reference material, Steve Cambria for his excellent article, Dave Fjelline for all his help and continued friendship.